For my previous tube-based project, the audio amplifier, I used silicon diodes in the power supply. Semiconductors are difficult and complicated to manufacture however, so in keeping with the theme of the site I decided to use a vacuum diode for the high voltage supply of my upcoming radio transmitter. The tube itself is ordinary, and is essentially identical to the triode with the exception of a grid. I made a point to attempt to match the two tubes' filaments, and the results were excellent. Set to 7.4 volts, both filaments draw an amp each, meaning they are approximately at the same temperature. Due to the lack of a grid, the diode can conduct a far larger current than the triode, allowing the former to act as the power supply for the latter despite the identical construction. Once the tube was sealed off and gettered, I began testing it and recorded the characteristics below. As with the previous triode, the high voltage supply was the rectified output of my variac. 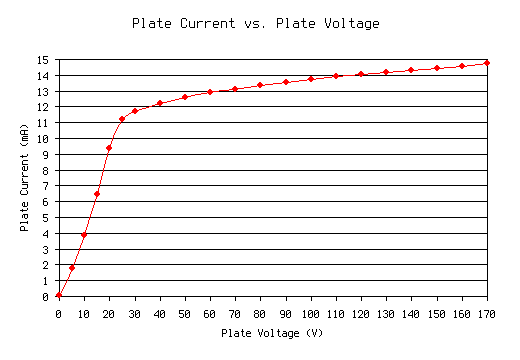 After conducting this initial test, I also built a simple power supply consisting of the diode rectifying the mains voltage (120VAC) into a 680µF capacitor. It was able to charge the capacitor to 155V with no load other than the analog multimeter. By connecting various resistors across the capacitor until the voltage was cut in half, I was able to determine that the series resistance of this power supply was approximately 13K ohms, which although high is perfectly acceptable for its intended use.