The power triode still functions and shows no signs of leaks. I believe that my new sealing method works, and from now on I should be able to produce long-lasting vacuum tubes. In order to test the long-term functionality of the power triode, I built an audio amplifier that drives a speaker. The circuit is very simple and can be seen below. The filament is powered by DC to reduce hum, and the plate is powered by half-wave rectified mains voltage. Both supplies have a resistor in series to limit inrush current, and the plate supply resistor also helps drop the plate voltage to around 120V; I was worried that 150-170V may be too much. Other than that, the grid is driven by two 1:10 audio input transformers in series, and is biased at the positive end of the filament supply. Most components have known characteristics, but the filament transformer isn't well defined other than that it produces around 7VAC with no load, and is large enough to power the filament without getting hot. 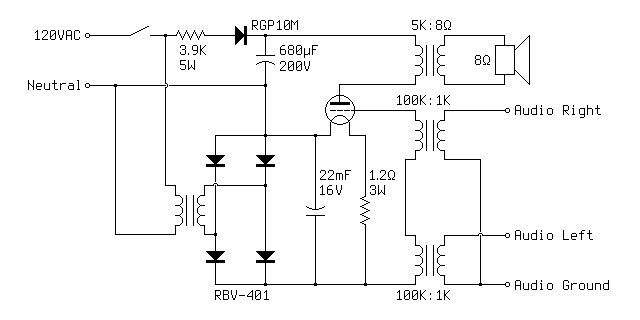 The amplifier works well. Although it isn't loud by any means, it has enough volume to listen to music in a small, quiet room. The frequency response is adequate; I picked a fairly large 5-inch speaker to counterbalance the poor bass response of the input and output transformers. This worked, but the high frequencies are somewhat lacking as a result. The triode in its cubby provides a pleasant light as well, like a slightly dimmed incandescent bulb. Text and images alone do a poor job of describing it, however, so I recorded a video of it in operation. In the future, I plan to record videos for other major projects, especially those which would benefit from being seen in action.