Aside from the sealing method, the triode assembly shown in the previous article contains two other technical improvements. First are the feedthroughs; rather than welding the tungsten to the side of the nickel, a 0.5mm hole was drilled into the end of each nickel wire, into which the tungsten was inserted and welded. This produces a concentric feedthrough which takes up less space within the pinch seal, and looks cleaner as a result. Next is the grid; rather than winding it free-hand I threaded a 3/16 inch brass rod at 10 TPI, which when used as a form produces a grid with the same thread pitch and an outer diameter of approximately 0.2 inches. This ensures that the grid spacing is even, and will allow me to make other triodes with the same grid characteristics. The new feedthrough style and the winding form can be seen below.

After the pinch seal assembly was complete, I joined it to an envelope which I had prepared earlier, using my base seal mandrel to ensure concentricity. I then evacuated and baked the tube using the usual procedure. The pressure at seal-off was stable at 30 millitorr, as was the case with the previous diode. Contrary to my earlier assumption however, this was not due to a leak. Rather it was due to the thermocouple gauge being calibrated in winter, when the ambient temperature was 50°F lower. Checking the gauge against my Geissler tube (which has a visual transition at 30 millitorr) revealed that my gauge was reading approximately 20 millitorr high. This means that the true seal-off pressure for this triode and the previous diode was around 10 millitorr, which is acceptable. I then heated the titanium anode to orange-hot with my induction heater, let the tube cool, and began testing it. 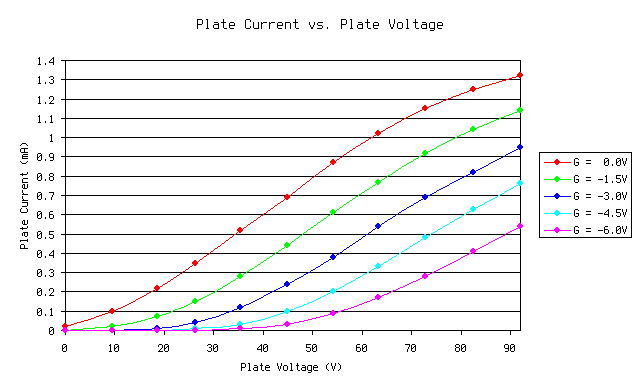 I decided to graph this triode's characteristics in a more conventional manner, drawing different curves for various grid voltages. The filament setting used for all curves was 3 volts at 1 amp. I believe this is fairly low for the size filament I used (0.08mm) but I currently have no method of determining the temperature of the filament, and didn't want to burn it out during testing. I also tested the tube qualitatively by connecting headphones in series with the plate and touching the floating grid lead. As usual, I was able to hear buzzing from the fluorescent lights overhead.

As with the previous tube, I will wait at least a week before giving it a base, to be sure that it has no leaks. If it does last, I will be extremely confident in my ability to make air-tight Pyrex tubes, due to the imperfect nature of the this particular seal. So far it appears that seal color is the ultimate indicator of seal quality; I have had no failures when the tungsten is golden brown and free of bubbles.