In making this triode I tried to improve on the weak points of Triode III, in order to make a triode suitable for an audio amplifier. Namely, I wanted to increase the plate current and the lifespan of the tube. The plate current was improved by increasing the filament size to 0.1mm and by increasing the grid spacing from 30% to 80% open. The lifespan will hopefully be longer due to an improved method of sealing the titanium feedthroughs, which I will describe below. The tube is otherwise very similar to its predecessor.

Previously, I had been making the pinch seals without processing the raw titanium wire in any way other than lightly oxidizing it where it was to be joined to the glass, occasionally sanding it beforehand. I had also only been heating the glass enough to make it soft enough to squeeze around the wires with pliers. I believe these factors are the cause of previous tube failures. For the feedthroughs of this tube, I first ground off the native oxide layer of the titanium wire where it would be joined to the glass, to eliminate the possibility of porosity in this relatively thick oxide layer providing a path for air. I then sealed it into the glass without oxidizing it beforehand. Due to the heat involved in the sealing process, the wire tends to become oxidized on its own. Finally, after pinching the glass with pliers, I thoroughly heated the seal area with a MAP gas torch until the glass started beading together and wetting to the titanium. Seals made this way have so far been very reliable. Interestingly, they also contain a few microscopic bubbles near the surface of the titanium within the glass.

After the tube was evacuated, baked, and sealed, I heated the plate with my induction heater to act as a getter, and tested the tube qualitatively by building a simple audio amplifier with it and connecting it to an mp3 player. With some adjustment it could play music clearly, louder than any previous tube. I then built the following circuit and recorded the tube's grid response curves at various filament settings. The 12V battery is left floating in the schematic, but I connected either end to ground during testing to get a 24V range of grid voltages. 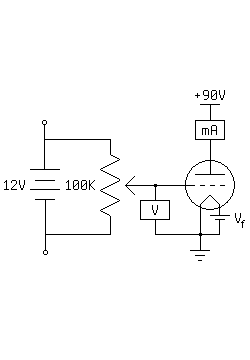 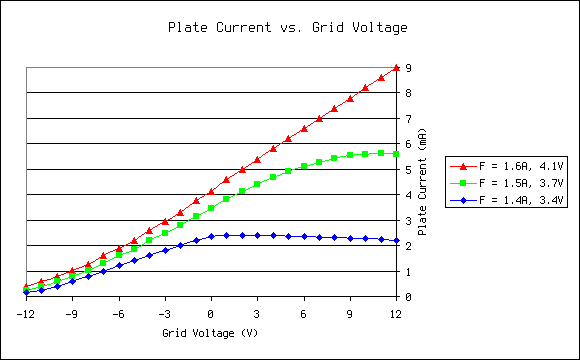 This tube is far more powerful than any previous triode, while still being fairly sensitive. It seems to operate best with the filament at 1.6A, with a very large linear region suitable for amplifying an audio signal. Within this region, the transconductance is around 400 µmhos.

In the future, I will continue testing this tube for stability. If it remains functional and shows no signs of leakage, I will build a standalone audio amplifier with it. Beyond that point, I will most likely attempt to build a tetrode.