After a four-month delay due to switching to Pyrex, I have resumed making vacuum tubes. This diode was not necessarily designed to be useful or novel in itself, but rather as a test of the new construction method. I will monitor its characteristics over the next few weeks, and if it remains stable I will be confident in my ability to produce air-tight vacuum tubes using Pyrex.

The assembly of this diode is documented in the previous four articles, and the internals are very straightforward: a 0.08mm tungsten filament runs vertically through a short 8mm titanium tube. All other components are made of 0.8mm nickel wire with the exception of the tungsten seals, which are 0.5mm and are spot-welded between the internal structure and the external leads.

The evacuation process was straightforward as well. The tube was first evacuated without heat for an hour, mainly due to the long gap between pump uses. Moisture from the air had accumulated within the vacuum system, necessitating a long degassing process. Once the pressure had dropped to 30 millitorr, I turned on the bakeout oven and heated the tube at 50W for an hour, anticipating that the pressure would continue to drop. I then let the tube cool for 30 minutes, at which point the pressure was still at 30 millitorr, and I noticed a small leak in the pump's hose connection. Rather than fix the leak immediately and restart the evacuation process, I decided to seal the tube off at 30 millitorr and fix the leak later. The titanium getter performed well even at this high pressure, and the tube was functional with no signs of residual gas. Its characteristic curves at different filament settings are recorded below. 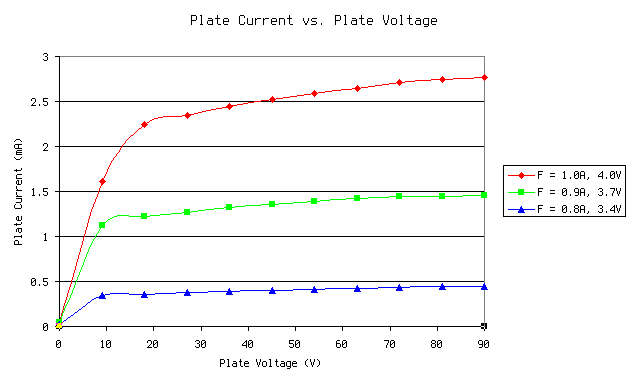 I initially planned to give this tube a base with pins, but I decided to wait until I was sure it would continue working. In the meantime, I will develop a standard base and socket to be used with all future tubes which have this type of globe envelope. Considering that this envelope is larger than what was possible with soft glass, I will also resume my progress towards making a tetrode, as this is my next major tube-making goal.